This is a trip report for a journey I took in October 2015. With the opening of the Hokkaido Shinkansen through the Seikan Tunnel in March 2016, a very similar journey is still possible however it is slightly altered. One less change is required; instead of changing travelling Sapporo – Hakodate – Shin-Aomori – Tokyo, passengers now travel Sapporo – Shin-Hakodae-Hokuto – Tokyo.

I awoke to the sound of my alarm at 6 am in my luxurious hotel room in the northern Japanese city of Wakkanai. I was about to start a long rail journey; 3100 km, 30.5 hours and 8 separate trains that would take me from the northernmost JR station (Wakkanai, Hokkaido) to the southernmost (Nishioyama, Kyushu). I had 7 connections, of which the tightest was 7 minutes from arrival to departure. 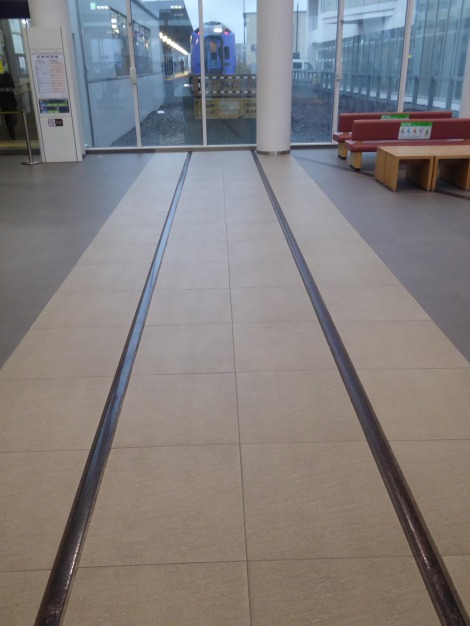 The old tracks at Wakkanai run through the station’s waiting room. The train beyond the glass is standing as far north as a train can go.

I checked out, and made my way through the morning drizzle to the station to catch my first train; the 07:00 Super Soya from Wakkanai to Sapporo. As I arrived at the station, the Ki-Ha 261 series DMU was being shunted into the single platform. The 261 series, like many of the JR Hokkaido trains, has a raised driving cab in a hump on front the leading and trailing cars. Below the driving cab is a gangway, which allows inter-unit access when coupled to another 261 series. The 261 series is capable of tilting, which cuts 30 minutes of the time taken by the 183 series units on the Sarobetsu services.

261 series on a Super Soya at Wakkanai

I found my seat in the green car, and we departed right on 7am; we were off to a good start! My first connection was in Sapporo, and was only 7 minutes, so I needed this train to run on time. You may have heard about the efficiency and excellent timekeeping of Japanese Railways; this is not so true for JR Hokkaido, who seem to take a more relaxed view of running trains. Despite our on time departure, we started loosing time through extended platform stops and late running trains passing us on the single line. I did a timetable check at Nayoro, and found to my horror, that our late running had blown out to 10 minutes! If this time was not made up, I would not make my connection in Sapporo. If I did not make my Sapporo connection, the whole journey would be thrown out by at least 6 hours!

The conductor came through the train; a small, elderly man with a big teeth and coke bottle glasses. I showed him the ticket for my next train and said that we were running late and I was worried about making my connection. He looked at the ticket, then at his watch, then back at the ticket before giving me a big grin and the thumbs up; “no problem!” he said and walked off.

Despite the conductor’s optimism, I watched the timetable closely and although we made up time, we were still 6 minutes late at Asahikawa. If we didn’t make up more time, I would arrive just in time to see my connecting train pulling out of the platform at Sapporo. We sped through towns and suburbs, arriving at the penultimate stop of Iwamizawa 5 minutes late. We made a very quick stop and were soon on our way to Sapporo station and as we pulled in, I had my luggage in the doorway, ready to bolt to my next train. We arrived 4 minutes late, and as soon as the door opened, I ran down the steps into the subway. My next train was 2 platforms away, and I ran up the steps to to the platform and jumped aboard the waiting 183 series. I had barely made it to my seat when the train departed; I had made it! 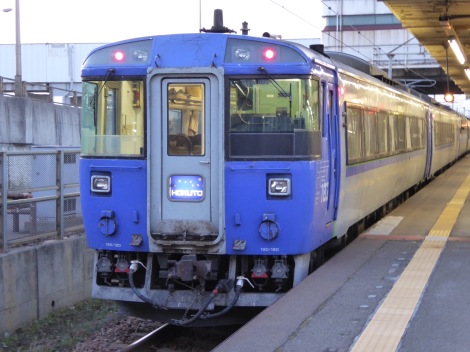 After leaving Sapporo, the Hokuto limited express purred along the coastline with beautiful views of the Tsugaru Straits, before skirting Uchiura Bay. Small fishing vessels were visible on the calm waters as we raced smoothly along the Hokuto main line, through Toyoura, Oshamambe and Yakumo.

Uchiura Bay, as seen from the Hokuto Limited Express

We arrived in Hakodate only 1 minute late, and it was an easy cross-platform connection to my waiting Super Hakucho service to Shin-Aomori. The Super Hakucho was operated by a 789 series EMU, looking very similar to an electric version of the 261 series DMU that had taken me from Wakkanai to Sapporo. The train was silver, with bright green from the front door to the tip of the nose. Like the 261 series, it had a raised driving cab above a gangway door. On the side of the train in yellow and blue was written “HEAT 789” big letters. Sounding like the name of a local radio station, it was actually an acronym for “Hokkaido Express Advanced Train” (which was written in smaller letters underneath). 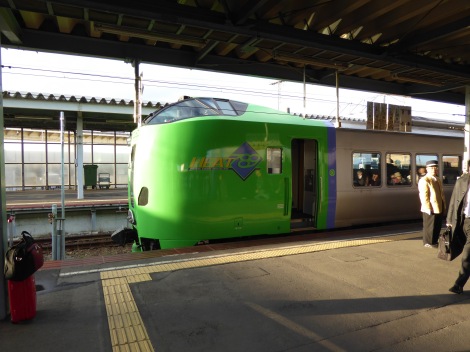 The Super Hakucho departed Hakodate 9 minutes after I had arrived, stopping at a few smaller stations before entering the Seikan Tunnel. At the time I travelled, the Seikan tunnel was the longest tunnel in the world (edged out in early 2016 by the Gotthard tunnel in Switzerland). The Seikan tunnel is 53.85km long, 23.3km of which is under the Tsugaru Strait. It was opened in 1988, and links the islands of Honshu and Hokkaido.

We entered the tunnel, and for the next 45 minutes, we travelled through the darkness; more like an express subway train than a medium distance passenger train. A LED display board at the front of the carriage displayed our progress through the tunnel with a little animated train moving slowly from one side of the board to the other. When we finally exited the tunnel, darkness had fallen, and we soon entered the city of Aomori. We paused at Aomori station, before continuing on to our destination of Shin-Aomori.

I was now 11 hours into my 30 hour journey, and I transferred from the bright green and silver 789 series EMU to a slightly less bright green E5 series Shinkansen operating a Hayabusa service to Tokyo. The 3 hour journey was fast, comfortable and unremarkable, and just before 21:30, I arrived at Tokyo station. At Tokyo, there was just enough time to get a quick dinner, as I had once learned the hard way that my next train did not have a dining car.

My next train, and bed for the night, was the Sunrise Express. The Sunrise express is an all sleeping class overnight train that runs between Tokyo and Takamatsu/Izumoshi. The train runs nightly, and is made up of two 7 car 285 series EMUs, which are split/attached at Okayama. I was travelling in the Nobinobi (carpet) car, and as with the Hamanasu from Aomori to Sapporo, my accommodation was just a small section of carpeted floor. Unlike the Hamanasu, I was dismayed to find that there was no pillow or blanket provided; only a sheet. I rolled the sheet up to use as a pillow, and despite the discomfort, I was soon asleep.

I awoke to the sound of a long winded PA announcement being made in Japanese. I heard only one word I recognised “Okayama”. This was where they train was split to head off for Takamatsu (Shikoku) and Izumoshi (Honshu) and was also my stop. I was stiff and sore from lying on the carpeted floor with no blanket to soften the “bed” and slowly collected my belongings in preparation for our arrival.

A berth in the Nobinobi car on the Sunrise express.

At Okayama, we were met by a small army of railway workers in blue boiler suits and yellow hard hats. They jumped in between the two 7 car units and split them into two separate trains. Within 4 minutes of our 14 car train’s arrival, the first 7 cars (the Sunrise Seto) departed for Takamatsu. A couple of minutes later, the second 7 cars (the Sunrise Izumo) departed for Izumoshi. Many of the passengers were still sleeping, oblivious to the buzz of activity around their travelling hotel. 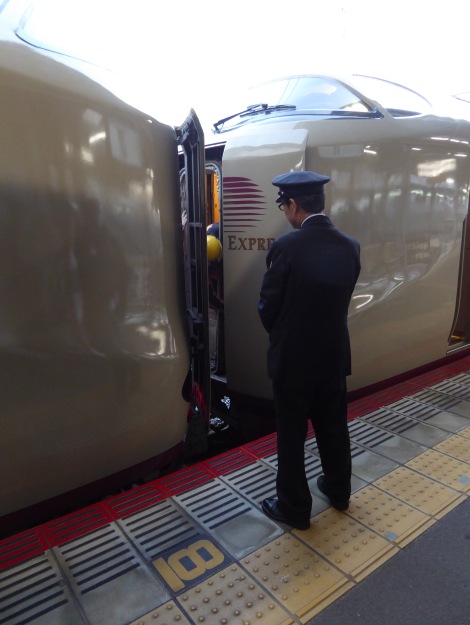 My next two trains were both 700 series Shinkansen trains, operating Sakura services. 700 series trains are technically beautiful; 16 car trains operating smoothly and quietly at speeds of up to 285 km/h. However, I find the Shinkansen trains to be as bland as they are impressive; the white and blue liveried duck billed 700 series especially so. Shinkansen trains are wonderful at moving large amounts of people very quickly and comfortably from one place to another, but they lack the character of the slower regional services.

The journey to Kagoshima-Chuo was smooth, quick and uneventful. It took just under 4 hours, with a train change at Kokura in the north of Kyushu. I arrived at Kagoshima-Chuo at 11:33; 28.5 hours into my 30.5 hour journey.

At Kagoshima-Chuo, I had my final connection. I left the Shinkansen and boarded a two car 47 series DMU. The train was ancient; at least 35 years old, and had springy vinyl covered seats running longitudinally along the cars. The livery was drab and faded; white with a blue stripe running the length of the cars below the window line and around the front at each end. It was somewhat anti-climactic that this careworn train would take me on the final leg of my 3100 km odyssey. 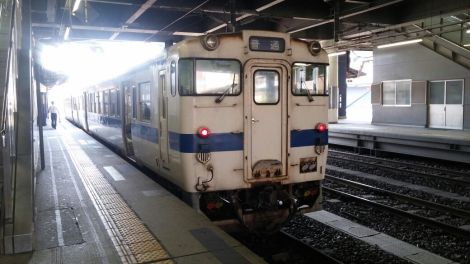 The old, but well maintained little train roared into life and departed Kagoshima-Chuo right on time. We clickty-clacked out through the southern suburbs of Kagoshima along the non-welded rail of the single tracked Ibusuki Makurazaki line. We paused regularly at double tracked stations to allow other small trains to pass, winding our way south along the eastern coast of Kyushu. After rumbling along for about 90 minutes, we finally approached my destination. At exactly 13:35, the little two car train pulled up at the unremarkable station of Nishioyama. I was amongst the half dozen passengers to leave the train here, and after a brief stop, the 47 series DMU departed for onward to Makurazaki, the track turning north east just beyond the station. 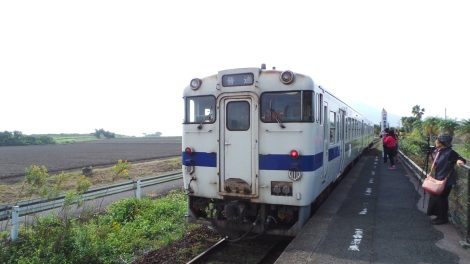 My train departs Nishioyama; my journey is over

Nishioyama station is just a single platform in the middle of nowhere; farmlands to the south, a small shop and picnic shelter to the north. There were a few people taking photos of the train, who then climbed into their cars and drove off; not even the local train enthusiasts bother to catch the train here. There was a big brass ornamental bell on the platform, which some people were having their photo taken ringing, and a plaque proclaiming the reason I had travelled 30.5 hours and almost 3100 km; this otherwise insignificant station is the southernmost station on the massive JR network. 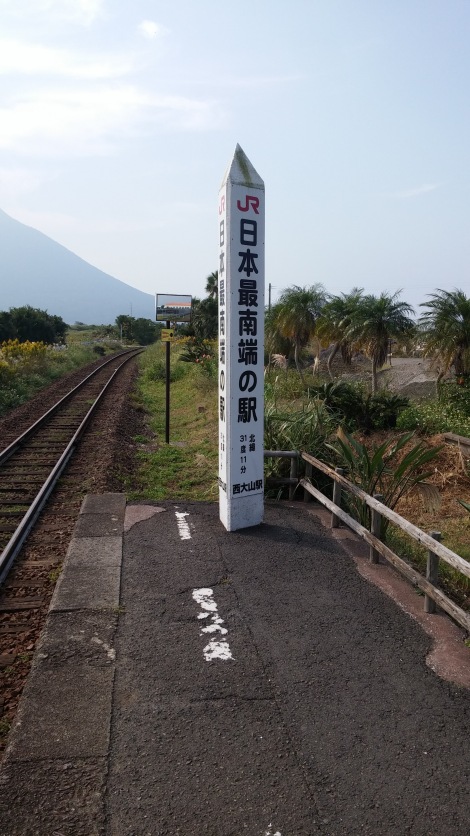 Looking south east at Nishioyama. The totem pole proclaims this to be the southernmost platform on the JR network.

I examined my surroundings; the picnic shelter was clean, but old. It proclaimed to have free Wi-Fi, but I was unable to connect. The land around the station was flat, and to the south west I could see the Kaimondake Volcano, dormant since 885. After the train had departed, there was no-one around and I could hear the wind whistling through the fields. Now that I had completed my 3100 km southbound rail journey, I sat down on the station and waited for the next northbound train…