The following is a trip report for a journey I took on Sunday, 26 August 2012.

All too soon, it was time to leave Philadelphia. I had a long, interesting journey ahead of me, with a destination of Brooklyn, New York. Instead of taking an Amtrak service direct from Philadelphia’s 30th St station to Penn Station in New York, I had decided on a route that would use 2 heavy rail systems, 4 subways and a diesel light rail.

I left my hotel in Eastwick, near Philadelphia Airport, and walked to the SEPTA Regional Rail station a short distance away. I climbed the steps into the 2 car Silverliner IV set and travelled to 30th St station. From 30th St, I took the Market-Frankford subway to 8th St, where I interchanged with the PATCO Speedline.

The PATCO (Port Authority Transportation Corporation) Speedline is a a subway line, running from 15th St in Philadelphia to Lindenwold in New Jersey. Rolling stock was manufactured by (or under licence from) Budd, with PATCO I stock delivered in the late 1960s and PATCO II stock delivered in the early 1980s (both are still in use). Trains run on standard gauge track – 4ft 8½in (1435mm) and are powered by 750v DC 3rd rail. Trains generally run automatically in ATO (Automatic Train Operation) mode, however each train has an operator on board who is responsible for door operation and starting trains from stations. The operator is also able to drive the train in full manual mode.

The PATCO Speedline took me over the Delaware River and into New Jersey. After a short 8 minute trip, I left the train at the Walter Rand Transportation Centre in Camden NJ. I transferred to the River Line, which is  a diesel-electric light rail service operated by NJ Transit, running on a shared rail line between Camden NJ and Trenton NJ. During the day, the NJ Transit railcars run as passenger service and during the night, Conrail run freight trains to various industries along the line. Conrail and NJ Transit are not able to mix traffic, as the Stadler GTW units used for passenger service do not meet heavy rail safety guidelines.

I didn’t have long to wait before a northbound railcar approached. It was painted white, with a horizontal blue strip around the window line and vertical yellow strips at the doorways. The railcars are in 3 articulated sections; a long passenger section at either end, with a short centre section containing the engine room (similar to a modern version of a Victorian Railways Walker 280hp railcar). Passengers are not able to move through between the passenger sections through the centre section.

The journey to Trenton took just under an hour, mostly on single track. We stopped at many towns along the way, and I was surprised at how busy the service was an a Sunday morning. The train terminated at Trenton and I left the railcar. As I stood on the platform taking photographs, 2 officious ticket inspectors approached me and told me that it was illegal to take photos there, and if I continued, they would arrest me. I told them that I would stop, but that was no way to treat an international tourist. I also pointed out that there were no posters or signs telling me not to take photos. They told me I should have known, I decided not to push my luck by asking how. 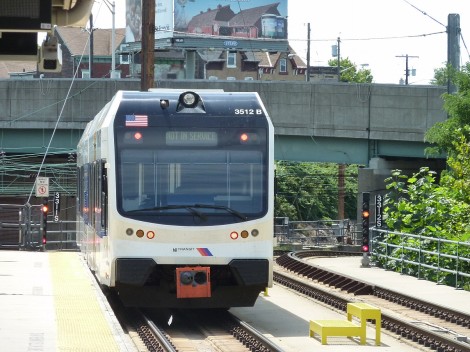 The photo they threatened to arrest me for; a River Line light rail vehicle terminates at Trenton, NJ

I walked across the road and entered the railway station. I bought my ticket for Newark, and went down to the platform. Although it was a Sunday morning, there was plenty of heavy rail action, with several Amtrak Northeast Regional services passing through, a SEPTA arrival from Philadelphia and an NJ Transit ALP-46A which ran through non-stop with a single carriage (I presumed the transfer of repaired or defective stock). My double deck NJ Transit service arrived made up of Bombardier MLV cars hauled by a Bombardier ALP-46A electric locomotive.

I found a seat on the upper deck of the large comfortable carriage, and we raced through the New Jersey countryside, stopping frequently, serving stations skipped by Amtrak Northeast Corridor services. One of the stations we stopped at was Metropark. This station does not serve a residential area, but was constructed as part of a large business park in the 1970s. It has 2 large multi-level parking lots, with a combined total of just over 3500 parking spaces.

A Bombardier ALP-46A locomotive at Newark

I left the NJ Transit train at Newark, and watched it depart for New York Penn station. I transferred to the PATH (Port Authority Trans Hudson) subway line, which would take me under the Hudson river into New York City. PATH Trains are powered by 600v DC 3rd rail, and operate on standard gauge – 4ft 8½in (1435mm). There are 4 termini: Newark (NJ), World Trade Center (NY), 33rd St (NY) and Hoboken Terminal (NJ). I took the train under the Hudson River to the World Trade Center terminus and exited into New York city. I walked for a few blocks to Chambers St station, where I needed to board an A or C train to Brooklyn.

I took in the atmosphere of this iconic city as I walked down the streets in constant shadow of the skyscrapers above. It has the feel of a city that was famous worldwide, but really couldn’t care less. The streets looked just as I had seen them in so many movies and TV series, as famous yellow cabs inched by in the heavy traffic. I made my way down into the historic subway system, one of the first in the world, and that too was just as I had imagined.

A New York Subway R32 set on an “A Train” service

The modern day New York subway system has evolved from several private subways; the BMT (Brooklyn Mass Transit), IRT (Interborough Rapid Transit) & IND (Independent Subway System). I would require a whole blog entry just to start explaining the current system, so all I’ll say about it here is that it is awesome and everything I expected it to be!

I boarded the first train that came along. After we departed, I was a little alarmed to find it was an express service. I didn’t know where the train would stop, and looked at the map on the wall for clues. By looking at the internal indicators, I ascertained that I was on an A Train. The map had letters and/or numbers next to each stop, indicating which service stopped at each station. I looked at my stop – Nostrand Av, and was relieved to find the A train stopped there.

I left the train at Nostrand Av and climbed the steps to the street, finding myself in a busy shopping precinct deep in the heart of Brooklyn. The area was very multicultural, with Caribbean, Asian and Middle Eastern take away food shops mingled with African and Indian grocery shops.  I followed the directions towards The Missing Lantern Hotel, through the shopping centre and under the Long Island Railroad tracks to a classic New York brownstone walk-up building. I had a code number for a key safe, and found my keys inside. My “hotel room” turned out to be a full size studio apartment, complete with large bathroom, full kitchen and stained glass windows. The floors were hardwood and there was a very soft king sized bed. I had been unable to afford a halfway decent hotel in Manhattan, but this beautiful apartment (at a fraction of the price) more than made up for it!

A tip for the budget conscious tourist to New York: consider Brooklyn, Queens or Newark for your accommodation. It’s an easy commute to Manhattan, and you’ll get much better value for money!